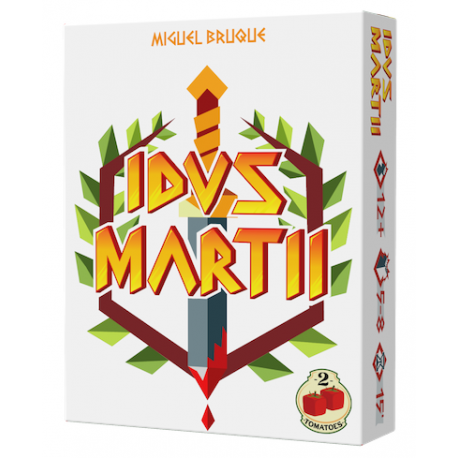 Idus Martii is a hidden role game for 5 to 8 players.

Idus Martii is a hidden role game for 5 to 8 players.

According to Plutarch, a seer had warned that harm would come to Caesar no later than the Ides of March. On his way to the Theatre of Pompey, where he would be assassinated, Caesar passed the seer and joked, "The Ides of March are come", implying that the prophecy had not been fulfilled, to which the seer replied "Aye, Caesar; but not gone."

Players are members of the Senate and must plot in favor or against the magnicide of Julius Caesar. But is not that easy, as they need to identify who shares their convictions in order to partnership against the other players...while keeping an eye open for those only look for their wealth.

There are four roles that are dealt every turn:

Once all the players voted twice, they reveal his votes and check if the Caesar will live or die.

But the decisions are not that easy. At the beginning of the game, players will take two different cards of their "team" (in favor, against, or to be neutral in the "magnicide") and they must discard one of these cards before the second round of votes take place in order to choose their final team.

Do you want to know how to play?