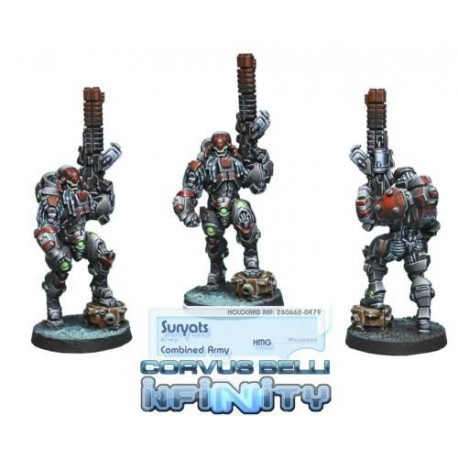 The Morat Heavy Assault Infantry is the one charged with attacking fortified positions and is specialized in close combat, either in urban situations or in the interior of ships.
Defining them as “tough” does not say enough about them. They are veterans with several years of experience in combat, participating in the Flash Wars and its predecessor, the Blink Wars. They have survived attacks and suffered ambushes, they have been wounded several times and have seen their companions buried. The sound of war is so natural for them that, if artillery discharges stop during the night, they jump out of their beds ready for a possible enemy advance. The smell of powder and burnt ozone of energy discharges are like a drug for them. In combat, the Suryats are very fast and always surprise their adversaries with the swiftness and courage of their assaults.
Manufacturer: Corvus Belli
Manufactured: High quality white metal
Dimensions: Miniatures of 28 mm
Notes: Requires assembly and painting