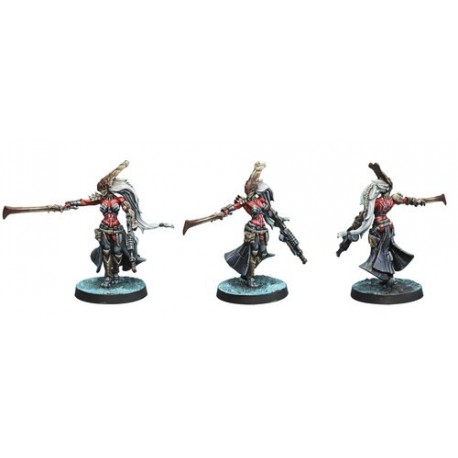 OZNAT, MORAT HUNTING REGIMENT, Hunting is the stellar sport of the Morats. It is their training for war.

Hunting is the stellar sport of the Morats. It is their training for war. However, in order to hunt down the enormous, extremely dangerous predators of Ugarat, their native planet, the Morats have developed a system of hunting with scouts, where cooperation among several teams of hunters allows them to overpower prey that would be impossible for a single hunter to handle alone.


Within a Morat hunting party, the duty of scouts consists of setting some small, trained predators onto the prey to harass them, weaken them, and lead them towards the place where the skilled hunters are found so they can end its life. Within Morat military tradition, the Oznats (groups of hunters and scouts) have been widely used in combat throughout its violent history. Because of this, when the EI brought The Hungries from the gate of hell where they were found, the Morats could see the tactical value of this organized group of fearful creatures being led perfectly in battle by one of the skillful Oznat hunters.

Traditionally, hunting tasks were generally carried out by Morat women. Since ancient times, they have hunted just like any man. The Oznat technique for training a group of Starving Ones consists of becoming the leader of the herd in the most brutal, primitive way possible. The Oznat challenges the alpha male or the alpha female, in case it involves a group of Pretas. During this challenge the Oznat imitates the ritual behavior of The Hungries but exaggerates this action to the extreme. It's not just limited to killing the alpha creature with its bare hands. The Oznat must also rip open its body and devour its guts in front of the entire herd. By following this savage, dangerous method, the Oznat undeniably takes over the command of the herd. When it comes to aggressiveness and brutality, a female Morat can be the alpha male of any other race.
Manufacturer: INFINITY