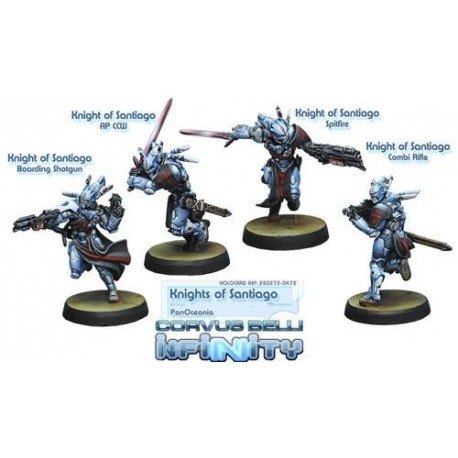 “To reject a challenge to do battle would not sit well with a son of the Apostle Santiago” Reply of the Abbott-Commodore Ulloa to the Yu Jing Admiralty at the naval battle of Trojan Point T1 (Edge of Humanity, NeoColonial Wars) who demanded the surrender of his forces.
The trading routes taken by the Circulars are also used by many Panoceanian citizens on their pilgrimages to the sacred places of the Earth and Neoterra. The Order of Santiago, with the blessing of PanOceania and O-12, has taken on the task of providing and coordinating assistance and protection to these pilgrims and to the Circulars that use these routes.
The Knights of Santiago form a part of the officer corps of the Panoceanian Navy, and are normally assigned to frontline ships. The members of the Order are amongst the best prepared and most specialized in the Human Sphere. The operational objectives of their boarding units is to assault and secure hostile ships and vessels both in deep space and in planetary orbit, and this type of operation means that they are always in the first line of fire. The Knights of Santiago have to break through the enemy defences by locking on to assault vectors that take advantage of the briefest openings in the enemy vessel’s defences. Knocked around in the acceleration chambers of their boarding capsules, they have to fight against the overwhelming fatigue to which they are subjected through hours of high-speed maneuvering.
Once the enemy vessel’s hull has been breached and penetrated, they have to fight from compartment to compartment, from locker to locker, until each section is made fast. In general these manoeuvres are real death-traps, but as they also considered to be the fastest and most effective way of naval boarding, they are favoured by the Order, and, it has to be said, the Knights know that their patron, the Apostle Santiago, favours and rewards the most hazardous ventures as and when faith is accompanied by and indomitable courage.
Manufacturer: Corvus Belli