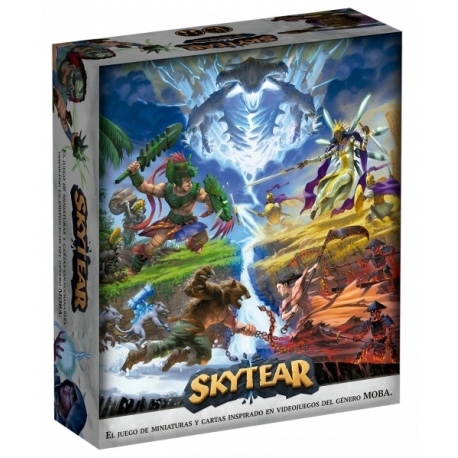 By buying this product you can collect up to 5 loyalty points. Your cart will total 5 points that can be converted into a voucher of 0,50 €.

Skytear is the energy that permeates the universe.

Exploited for centuries to create and develop civilizations, most of Olan Taa's territories have no Skytear left.

The world of Olan Taa is made up of thousands of islands that drift around a core of pure Skytear energy. A race of rational beings have created magical wells that attract loose fragments of Skytear like magnets. They are often called Torres, because their silhouette is slightly reminiscent of primitive stone buildings.

Towers always rise near a Nexus, a portal that allows rational beings to travel long distances without the need for flying artifacts or teleportation spells.

The loose Skytear spreads across the island, creating an Energy Dome, the surface of which momentarily blinds those who try to look inside.

Skytear is a card and miniature showdown board game prepared for 2 to 4 players. Choose your heroes, combine their cards to form a single deck, and go into battle in this miniature fighting game… no dice!

Delve into a MOBA style board game with unique features. Skytear comes in a variety of formats: start with the base box and expand your play options with expansions that are released regularly.

The Skytear basic set includes everything necessary for players to get started in the game and to start attending tournaments and championships. Choose your heroes from four different factions and have them face your opponent to destroy the enemy Nexus. The miniatures are included pre-assembled and unpainted.