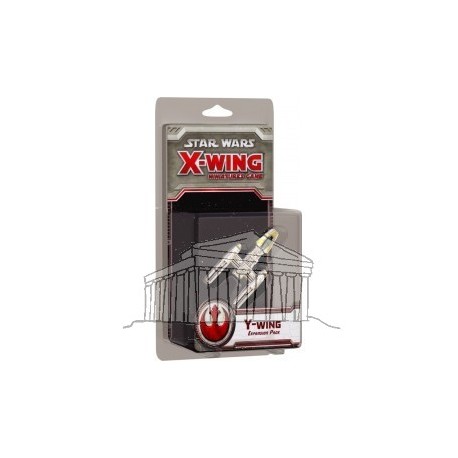 The tough-wing BTL-A4 model was one of the most versatile starfighters of the Rebel Alliance. The flexibility of its weapons systems made up for his poor handling.

Expand and improve your copy of X-wing!

The tough-wing BTL-A4 model was one of the most versatile starfighters of the Rebel Alliance. The flexibility of its weapons systems made up for his poor handling.

This pack includes everything you need to add one Y-wing to your game.

- 1 miniature hand painted with base and pegs.

This product is not a complete game. a basic X-Wing box is needed to play.

The Y-wing starfighter was a stellar prototype designed and improved since the end of the Clone Wars for the Republic in the manufacture of Koensayr. However, the model BTL Y-wing became operational in the Galactic Civil War where he was thought of as the heavy response of the Rebel Fleet.

The fighter-bomber-wing tanning in many battles was one of the most famous warships of the Alliance. Although not as fast as other ships of its fleet, long life-wing and kept flying and fighting for many years after it was considered obsolete. resistant reputation ship the pulse beat: the fuselage was built around a steel hull reinforced titanium. The original model was covered and protected by a series of modular panels. Technical, to the constant maintenance that required the ship, decided to withdraw this coating exposing the superstructure of the ship.

The Y-wing, even without most of its exterior panels, was still very strong; In addition, the deflector shield Champat (mounted on the rear fuselage) absorbed much of the damage suffered in the heat of battle. The enemy pilots who were waiting to kill it with a single shot were surprised to see the rays get into the hull.

BTL Y-wing was armed with three different weapons systems and could inflict as severe as he could bear punishment. The main weapons were a pair of Taim & Bak laser cannons mounted on a class KX5 front arc. Above and behind the cab, a small turret mounted device ArMek ion cannons. Besides this, at the front, in the belly under the cabin, there were two Arakyd proton torpedo tubes. This part of town could be replaced with a pitcher and armed feeding other ammunition heavy space bombs, missiles or.

Ion fission engines R200 Y-wing, able to reach 70 MGLT in space, had the additional support of repulsion elevators to ride in planetary atmospheres. In addition, the fighter was equipped with a R00-H hyperdrive Koensayr for interstellar travel.

Class One unit was controlled mediente package NH-7 flight Subpro. Its energy source constituted a O3-R cryogenic cells of Thiodyne installed in the transverse wing, supplying fuel to the internal ionization reactor. The reactor, a power generator Novaldez, had a powerful coolant pump that could keep the temperature in extreme conditions.

The Y-wing had a complex system of cooling pipes that often leaked. Aft of these components, wing also had an exhaust ring-shaped for hyperpropulsion.

The Y-wing was a slow and heavy ship, ideal for a showdown against capital ships, cannons firing protons in the form of short waterfall and had a small cannon to clashes between fighters. He had a turret from which a co-pilot strafed fired bursts to cover the game. A skilled pilot could use this line fighter against fighter, using his small cannon.

The Galactic Empire declined to buy the design of Y-wing starfighter, consequently was the Rebel Alliance who acquired the ship's being used from the beginnings of the Galactic Civil War and therefore the most demolished.