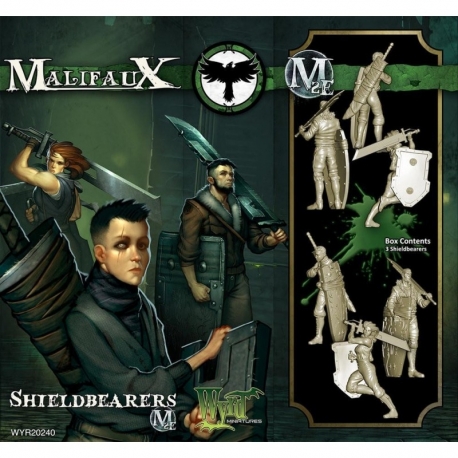 Shieldbearers are from the slums of Malifaux. A chance meeting with Reva has inspired them to fight anew, fighting for themselves and those around them. they are drawn to he by Reva's strength of character, her ability to ease the passage of the dying, or maybe just the magic that surrounds her. Whatever the reason, each Shieldbearer is loyal to Reva and has taken up arms to join her fight.

They fight with what they can find, often the broken swords and shields left behind by the fallen Guildsmen. This strange militia is more effective than it should be, driven by their belief in the one they follow and guided by Vincent St. Clair's tactical experience.

Even death can not stop them. Reva has promised to take care of each of them, and she does so even as they give their lives. Any shieldbearer that falls in combat at Reva's side rises once again as a spirit to carry on the fight. And each time this happens, it only sharpens the beliefs of theose who witness it.

This is a Resurrectionists Box Set, containing 3x 32mm 'heroic' scale miniatures made of high-quality plastic, and Stat Cards.

Please Note: Miniatures supplied unpainted and some assembly will be required.