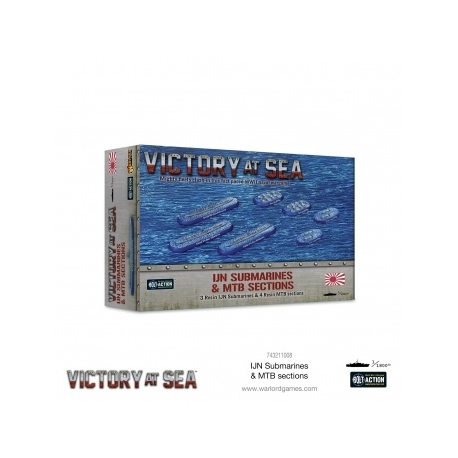 Submarines: The Kaidai-7-class, or KD-7, was developed in the late 1930s, following on from the preceding KD-6 class. With a surface range of 8,000nm at 16kts, and a submerged endurance of 50nm at 5kts, they possessed a slightly better underwater performance to the late-model KD-6s and better surface speed (though not range) than the earlier members of that class. All members of the class were lost by mid-1944. Another ocean-going submersible using 533mm forward and aft torpedo tubes, it served in the South Pacific as well as the waters off Australia. I-177 sunk the hospital ship AHS Centaur off Stradbroke Island. It was presumed lost with all hands on 18 November 1944, while the I-176 was lost six months earlier off of the Solomon's. There were 10 KD-7 submarines built overall.

MTBs: Designed as a suicide craft, the Shin'y' either carried a powerful explosive or two depth charges. The depth charges were intended to be planted by the pilot of the boat, after which he would then make his escape. Although nearly 10,000 were built, they accounted for the sinking of only 5 ships, mainly landing craft.

The Imperial Japanese Navy fielded a number of variants on a standard torpedo boat design, differing mainly in machinery fit which affected displacement, giving the illusion of more variety than existed in practice. 238 boats were built within these designations, all armed with two 18-inch torpedoes and 25mm or 13.2mm guns.