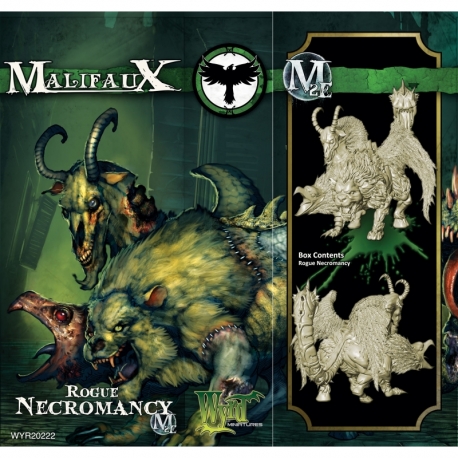 While many of the Resurrectionists in Malifaux only use human bodies in their experiments, McMourning is not so choosy. His early studies in necromancy, carried out in an effort to aid the Guilds war on the undead, used dogs. As he progressed and his good intentions gave way to the feverish desire for knowledge at any cost, he began to replace damaged parts with ones harvested from other bodies. Soon, he was stitching together composite monstrosities from whatever he could get hold of.

In his hidden lab, McMournings less successful experiments crawled about ignored by their creator. Many of them are fed to his proudest creation, the Rogue Necromancy. This beast possesses the strengths of many animals, and none of their weaknesses. Strangely, it recognizes McMourning as its master, allowing him to safely release it at times, both to feed and to collect fresh parts for him. The fact that it eats the rest of the body, before returning with a few scattered limbs as a gift, doesnt bother McMourning in the least.