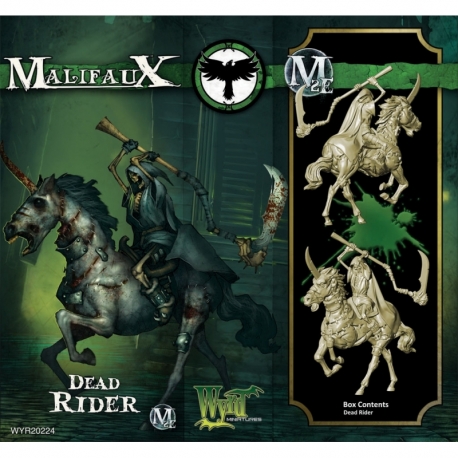 Where the Dead Rider came from is a mystery. It seems likely someone created it, but as none of the Resurrectionists encountered by the Guild thus far have the necessary skill for such a feat, it is likely to be a product of Old Malifaux. This terrifying being attacks convoys, slaughtering anyone too slow to escape with an ancient looking scythe. The Guild know it only attacks Soulstone transports, beginning with a lightning attack on the guards before cutting through to the cargo and making its escape. Often it takes several bodies too, snatching them up with the scythe blade to sling them across its saddle.

While the Guilds response has been to send more guards, this has had limited effect; it only results in more deaths, which seems to invigorate the Rider. He still claims his prize every time, taking more bodies in exchange for the fiercer resistance. What exactly the Rider does with the Soulstones is uncertain, but the corpses seem to be used to repair the Rider after each battle.