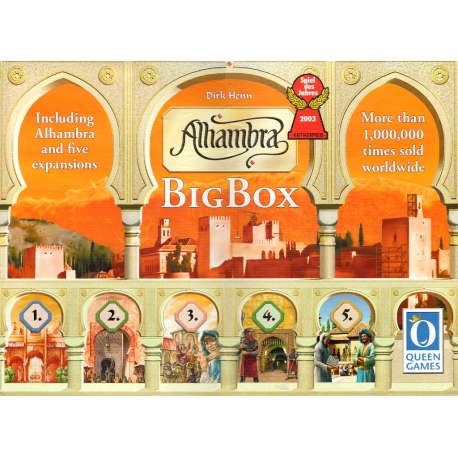 Build your own Alhambra hiring builders from around the world and paying them with coins of that era.

The 'Big Box' Alhambra edition of the game includes the base game plus five expansions. The box is designed to store the entire contents of the expansions separado.Alhambra is a game for all ages of simple rules. Gather mechanical management and construction around a topic that receives a superb treatment: the construction of the palace of the Alhambra. The quality of the material is part of the pleasure it provides the game.

Build your own Alhambra hiring builders from around the world and paying them with coins of that era.

Coordinates the purchase, construction and reconstruction better than your opponents and be the winner.

This complete edition includes the base game and five expansions

The basic game and a total of 20 expansion modules.

• With the viziers for the player may interrupt the normal sequence of play to perform a special action; buying a building tile to exact price, but get an extra turn
• With exchange offices you can use these cards as if they were money, combining both payment.
• With bonus cards once discovered count as a building of the same type shown.
• A new type of building sheds that are placed according to how recorded as 0-3 of a given type of building, depending on the adjacent squares.

• A new type of currency (Diamonds)
• The city gate allowing passage through the walls
• A new building (military camps)
• Letters of characters, each with its unique characteristics

• Peddlers
• The walls
• Thieves (which allow steal money on the table!)
• Change: overpay who finally have their laps.

• New cards counting the value of the buildings vary in each count points, so beware what you build!
• The Power of the Sultan: his power players will know how to acquire buildings without paying! Yes, they have to build them immediately in his Alhambra.
• The Caravanserai: Caravanserai cards are money cards with a variable value, since it may increase throughout the game. Once they used their value returns to the starting point, but can grow again.
• The Arts of the Moors: come into play "cultural" tokens, tokens that can get if you have buildings of the same value and give the player an additional action on your turn (advance cultural chips) and points on each count, according to the records that have and value marked on them.