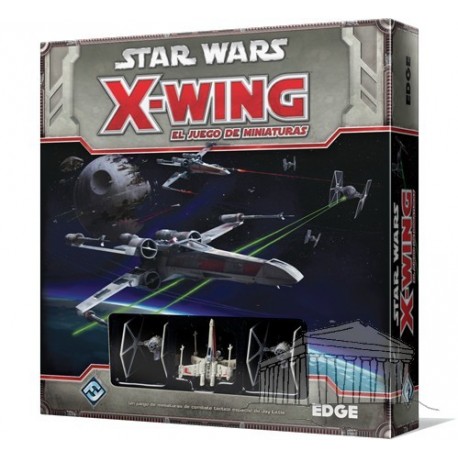 X-Wing is a fast-paced tactical space combat game set in the universe of Star Wars.

LONG AGO, IN A VERY, VERY DISTANT GALAXY ...

The civil war has broken out. Despite being in disadvantaged, the Rebel Alliance faces the tyranny of the evil Galactic Empire. Although members of the Imperial Navy widely outnumber the Rebel fleet, the Alliance relies on the ability of a handful of intrepid pilots to change the fate of the galaxy ...

Plan your strategy! Move your ships! Destroy your opponent!

Drivers, to your ships! And may the Force be with you!

X-Wing is a fast-paced tactical space combat game set in the universe of Star Wars. Players control starfighters of the Rebel Alliance or the Galactic Empire, assigning pilots and equipping them with special weapons and upgrades, to beat their rivals with deft maneuvers. This basic package contains everything needed for two players to start playing X-Wing: miniature hand painted ships, special dice, cards, chips and quick-start rules. A manual of advanced rules with special missions that take the gaming experience to a new level also included

Open the box and start playing right away.

The basic X-wing box contains everything you need to start playing, scripts, letters, and ships fully assembled and painted.

Moreover, Rapid X-Wing rules Establish the basis for a system that can be extended with your ships and favorite characters from Star Wars.

The rules of X-Wing: The miniatures game are simple and dynamic; are learned easily and offer an intense and bitter experience with a high strategic component. Just fix the type of movement of every ship in the corresponding wheel maneuvers and then guide ships into battle. During the course of the game, players will have to react to sudden changes that occur in the battlefield. Acerad your nerves because if you do not you show more cunning than your rivals have gone sidereal reduced to scrap.

X-Wing lets players star in intense duels among the most characteristic starfighters saga, and in the eye of this hurricane rapid spatial impressive plastic miniatures game are. The basic box contains three X-Wing Starfighter detailed and hand painted by professional: an X-wing and two TIE fighters.

In addition, expansion packs add even more options; with them you can add more to your starfighter squadrons and lay in their cockpits to a wide variety of different drivers.

Play recommended for over 14 years.