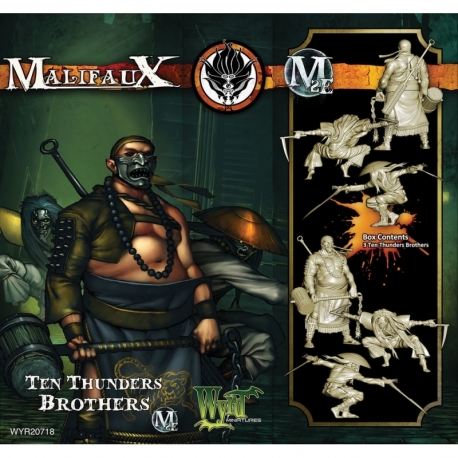 Not everything can be achieved by stealth and guile. When the Ten Thunders need to make a statement with blood, or defend their territory from attack, they send out the Brothers. Anonymous behind leering demonic masks, these hardened warriors are experts with the ten sacred weapons of Wxu-Shu. Only on the orders of the clan are these weapons used, as to do otherwise is punishable by death.

The Brothers are recruited from the lower ranks of the Three Kingdoms, those who will serve loyally to lift themselves from the constant toil of their daily lives. They are trained rigorously, rewarded with wealth and prestige, and seen as tools of the clan.

Their oni masks no only make them even more fearsome in battle, but also prevent Brothers from being identified on the street. As a method of passive control, it is highly effective. Throughout the Three Kingdoms, and these days in Malifauxs Little Kingdom as well, no one speaks ill of the clan in case a Brother is nearby.