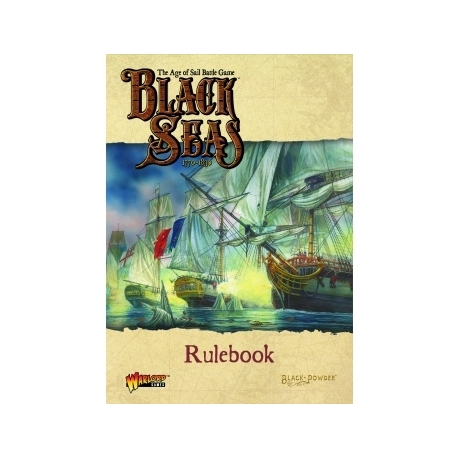 Black Seas focuses on the golden age of sail, which encompasses the period between 1770 and 1830. During this period of maritime warfare ships were beautiful and deadly machines of war. This Black Seas rulebook allows you to recreate the thrilling naval battles of the age of sail in all their glory. Utilising a unique and innovative initiative system based around the most important factor of sail powered combat: the wind. Additional rules enable you to fight in a 'line of battle', engage shore batteries, rake your enemies with withering initial broadsides or capture vessels in heroic boarding actions. All the while avoiding such hazards to navigation as fog banks, fire ships and shipwrecks. The rules allow you to field fleets comprised of vessels ranging from the tiniest gunboats up to the true giants of the waves, the mighty 1st rate warships. Also included are rules for such famed vessels as Bucentaure, Santissima Trinidad, USS Constitution, and the legendary HMS Victory. Black Seas also provides national rules for the four main protagonist of the era: the French, Spanish, American and Royal Navies, including rules for such renowned commanders as Commodore Decatour, Admiral Villeneuve and the inimitable Admiral Lord Nelson.
The thirteen scenarios included range between merchant raids, running blockades and fighting pitched battles, finally culminating in the engagement that defined naval combat in the age of sail: the Battle of Trafalgar.

16 other products in the same category: