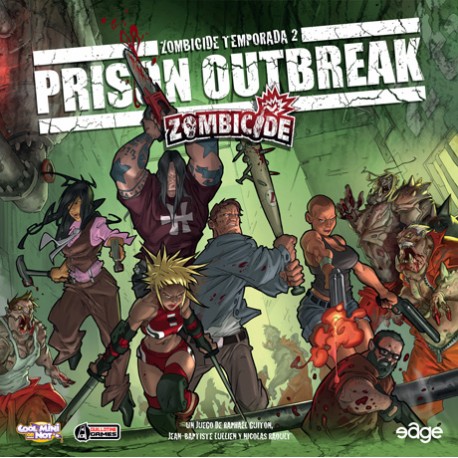 Prison Outbreak is the second season Zombicide, and is a cooperative game for 1-6 players of 13 years or more.

Prison Outbreak is the second season Zombicide, and is a cooperative game for 1-6 players of 13 years or more.

Although it is designed as a standalone game, it is compatible with other products Zombicide, as the original Zombicide or expansion Toxic City Mall.

Take the role of a survivor endowed with unique abilities and skills used both as the power of teamwork against hordes of zombies! Infected creatures are controlled by simple rules and a deck of cards. Play 10 missions in 10 different maps created from modules included map, or create your own. Find weapons. Kill zombies. The more zombies you kill, you become more skilled and more zombies appear.

Six survivors are preparing to turn a zombie-infested prison in his refuge. They will face zombies berserk, killing machines bloodthirsty. However, our heroes have new powerful weapons: automatic shotguns, double axes, bats with nails, butcher knives, guns and even bayonets!