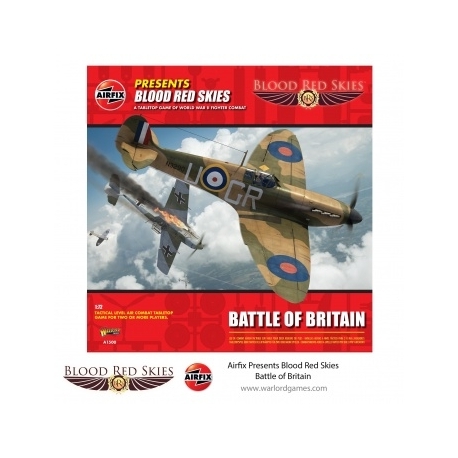 Written by Andy Chambers, Blood Red Skies is a tabletop miniatures game where you take command of a force of fighter aircraft in battle. The emphasis in Blood Red Skies is on action and the game is fast-paced, with no pre-plotting or book-keeping required. A game of Blood Red Skies with two planes per side can be fought in twenty minutes or less.

The Airfix Presents Blood Red Skies box set comes complete with everything you need to get playing the game, and four aircraft: two Supermarine Spitfire Mk IIs and two Messerschmitt Bf109-Es, in 1:72 scale.

Supermarine Spitfire Mk.IIa - Possibly the most iconic fighter of the Second World War the Supermarine Spitfire along with the Hurricane was instrumental to the RAF winning the Battle of Britain in 1940. Keeping its popular shape and constantly improving its armament and engine, Britain would go on to build more Spitfires than any other aircraft type during the war.

Messerschmitt Bf 109E-4 - The Messerschmitt BF-109 'Emil' was the Luftwaffe's premier single-engine fighter at the outbreak of WWII. This powerful Luftwaffe fighter ran wild over Poland, the Low Countries and France devastating its opponents. Throughout the war the Bf-109 constantly improved its aerodynamics, weapon systems and engines to keep up with Allied fighter development.